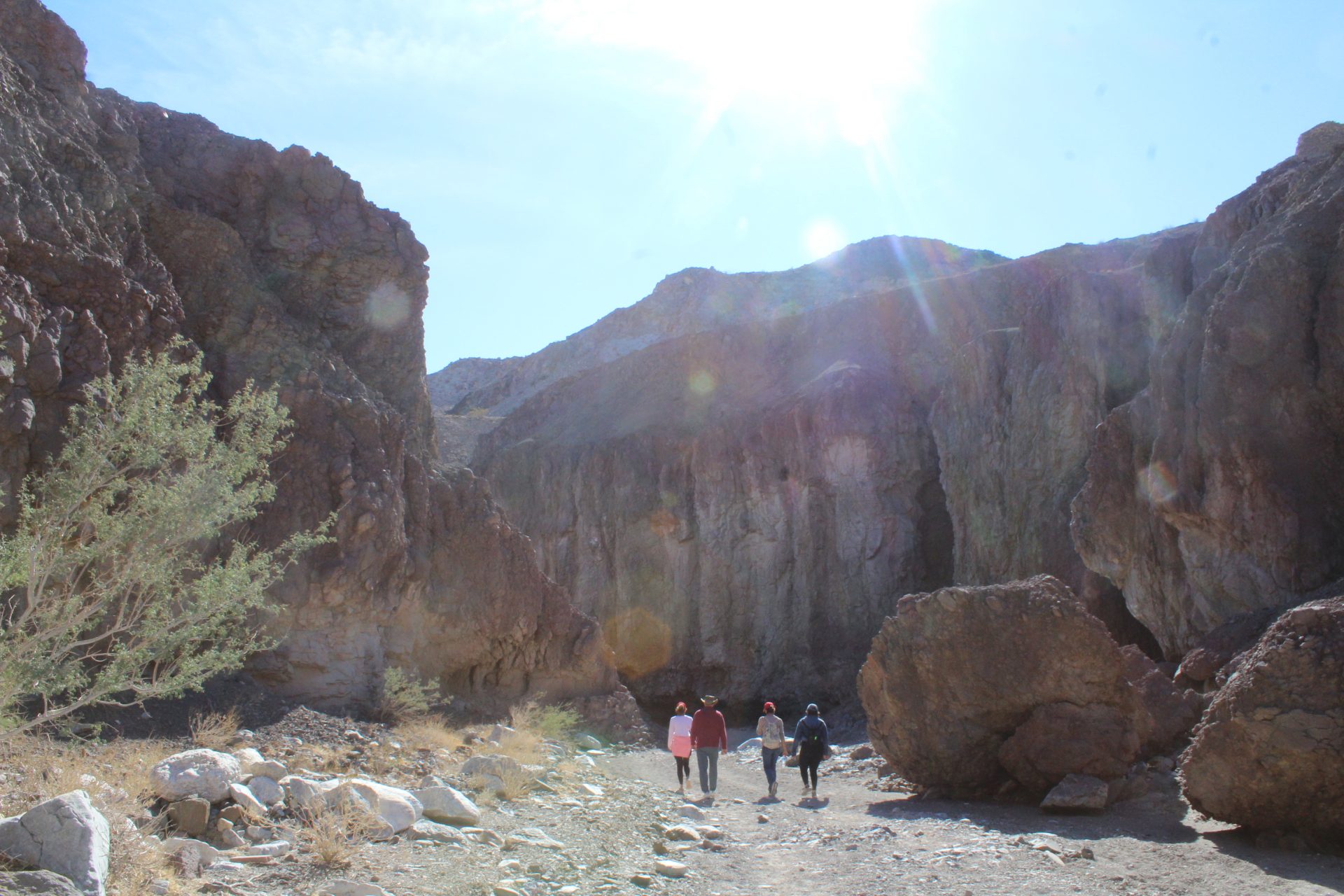 Members of the Imperial Valley Lowlanders hiking group venture into the canyons around Painted Gorge outside Ocotillo during the group’s first hike of its spring season on Sunday, Jan. 9. | KATHERINE RAMOS PHOTO
Home
Featured Stories
Share

OCOTILLO — The riot of colors making up the sedimentary, metamorphic, and igneous rock walls of Painted Gorge range from red, yellow, greenish gray and purple, setting it apart from the mountains surrounding it.

The walls of the gorge box everything and everyone in, and the weekend weather made the atmosphere and terrain seem that much cooler. If one were to explore past a nearby open area called “the amphitheater,” more paths farther into the mountains lead to Fossil Canyon and Shell Canyon.

That’s where the Imperial Valley Lowlanders’ first hike of the spring season ended on Sunday, Jan. 9, with some 59 adventurers setting out on foot to explore.

“It is about showing what a beautiful, diverse geological location we live in and that there is more to do than maybe people would suspect in the Imperial Valley,” O’Lear said.

The morning hike in and out of Painted Gorge in the Coyote Mountain wilderness just outside of Ocotillo kicked off what will likely be the first full hiking season for the IV Lowlanders since early 2020.

The Lowlanders started in 2019 as a pilot program with the Desert Museum to bring more activities to the Valley and show people the hidden gems and pathways not many know about. The group paused in 2020 along with all other group activities due to the COVID-19 pandemic. But in fall 2021, hiking made a comeback.

Painted Gorge is one of the many gems of the Imperial Valley desert. A 25-minute, bumpy ride off Interstate 8 brought the 59 hikers to the area, a number that interim Director O’Lear said is the largest group she has seen yet with the Lowlanders.

Those with the energy to go beyond the ending point of the Lowlanders’ Jan. 9 trek and farther into the gorge would find that the path leads about 10 more miles up the mountains to the top of Carrizo Mountain.

Sunday’s hike was not one such hike, though. The IV Lowlanders take people on shorter hikes that are enjoyable and not too strenuous. People were able to talk as they walked without being too out of breath, even bringing along their dogs if they wanted.

Holtville City Council member Richard Layton was along for the hike Sunday. He has been an avid hiker in the Imperial Valley and has taken part in the Lowlanders hikes before. The Painted Gorge is one hike he has never done, and Layton said he was pleased to see the area and loved the colors of the rocks around him.

“Our Valley has a lot of jewels and it’s all in our backyard; I just love exploring new places,” Layton said.

“We did almost all of them last season except for the last one,” Amanda Cochran of Imperial said. “There are a lot of places around us that we’re unaware of that are just so interesting, with history and rich with mythology. That’s what I really appreciated about these hikes.”

Those who are looking for a desert challenge are encouraged to contact the Jacumba Hikers.

Veronica Mabor of Brawley and Ursula Camacho of El Centro said they have been on hikes with the Lowlanders before and hope to be able to get better in the future for the Jacumba Hiker days.

“There’s no way we would have done that alone,” Camacho said about the hike.

The next hike for IV Lowlanders will be on Jan. 23 to the De Anza Overlook and the Yuha Geoglyph. All information, rules, and requirements are posted on the Lowlanders’ social media pages on Facebook and Instagram.

Previous
WHATMATTERS: California on Track for Worst COVID Surge Yet